The Beginning of Lionel Messi

Lionel Messi was born an ordinary child just like us but with a passion for football at an early age. He was born in central Argentina but relocated all the way to Barcelona at the age of 13 years old. This was the beginning of his current lustrous career at the Catalan. We all dream of being footballers as children but very few go on to achieve it but Messi made it happen.

First Appearance For The First Team

At just the age of 17 years old, he made his first competitive start for the Barcelona first team. After just 3 years of first team football, he cemented himself as an integral part of the squad. In his first full season in 08/09 La Liga season, he helped secure the trebel in Spanish football.

This was just the beginning, he then went onto win the Ballond’Or that season. His success on the pitch was being recognised with the greatest individual award in world football. Messi then went on to win it the following 3 seasons making him the first footballer to win it 4 times in a row.

Where Is Messi Now?

Messi is still at Barcelona now where he has gone on to win many great achievements with the club including many Champions League trophies, a number of La Liga titles and more Ballon d’Or trophies. He has been defined as arguably the best player ever in football alongside Cristiano Ronaldo.

The Beginning of Kylian Mbappe

Kylian Mbappe was born in Paris, France on 20th December 1998. Just like other top professional football players, his dream became a reality. He began his career at the Monaco B team but it only took 3 weeks for him to be promoted to the first team. This was due to his high level of skill and maturity in the game.

Mbappe broke into the first team aged 16, nearly 17 years old which went on to break Thierry Henry’s record. His first appearance came on 2 December 2015 which was a 1-1 draw at home against SM Caen. However, in his first appearance, he came on at the 88th minute with no time to prove himself.

A few months later he went on to score his first goal for the club which was a stoppage-time goal against Troyes. Becoming the youngest first-team goalscorer in Monaco’s history certifying him as a sensational young talent.

Where Is He Now?

Kylian now plays for Paris St Germain, the biggest club in French football and they are also considered a ‘European Giant’. He plays alongside Neymar who is another sensational talent that is recognised all around the globe.

Since his first appearance, he went on to win back-to-back league top goalscorer in the 19/20 season. Mbappe also helped lead his team to the Champions League Final but missed out to Bayern Munich in a 1-0 loss.

The Beginning of Mason Mount

Mason Mount was born in Portsmouth, Hampshire on 10th January 1999. He grew up around football as his father was a manager at a non-league team including Havant Town. Mount would begin playing under-6 football as a 4-year-old and spent one day a week in training academies for Portsmouth and Chelsea. He then went on to sign for Chelsea at aged just 6 in 2005.

Mason Mount made his first-team appearance for his boyhood club on 11th August 2019 against Manchester United. This was a 4-0 loss at Old Trafford but the following week against Leicester he went on to score his first goal for Chelsea.

Where Is He Now?

Mount has become instrumental in the first team for Chelsea becoming one of the key figures at such a young age. He has an undeniable talent and continues to score vital goals for his side and has also received a few

England caps. Footballers as children can only dream of receiving a call-up to the National level.

The Beginning of Erling Haaland

Many people are unaware that Haaland was actually born in Leeds, England back in July 2000. This was because his dad was playing for Leeds in the Premier League at the time. However, at the age of 3, he then moved back to his parent’s hometown in Norway. Haaland was actually taking part in various different sports such as handball and golf.

Where Is Haaland Now?

After demonstrating his consistent goalscoring record he was signed by Borussia Dortmund in December 2019. On his debut he came on as a substitute in the second half, going on to score a hat-trick within 23 minutes of being on the pitch.

Haaland is now considered one of the hottest prospects in world football with all the big clubs wanting his signature. Constantly proving himself on the big stages of football at such a young age he is a force to be reckoned with.

Footballers as children all had a dream to once make it to the big stage and have gone on to achieve it. Although the percentage of footballers that make it is slim, hard work will always pay off in the end. 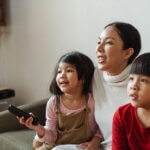 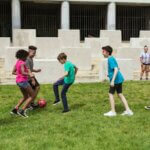