In this article, we go through is heading the ball in football bad for your child and why. It is important as parents to understand what the reasons behind this are so that we can better educate ourselves and keep the children safe.

Ryan Mason is a big advocate in achieving this ban so that children are not allowed to head the ball at a young age. This is because back in 2018 he was forced to retire due to a fractured skull. Although this did not come from heading the ball it raised suspicion that any head injury could be a serious injury. Regardless if it comes from heading the ball or during a challenge for the ball.

The reason that Ryan Mason is all for the banning of heading the ball is that during training as a youth coach at Tottenham. He gets to see day-in, day-out young players heading the ball with the wrong technique which has now been proven to cause brain issues later down the line.

As a young footballer your bones and brain is not fully developed so why does it make sense to header a solid football in training sessions? The short answer to this is, it doesn’t and luckily, people are beginning to realise this.

Now you might be asking yourself, “well if they are not heading in training, how will they learn the correct technique?”. Some clubs have introduced the use of sponge balls which are a lot softer and will not cause any harm. This gives the children the opportunity to learn how to head the football correctly before applying it to match days.

Typically, you will always see the majority of children afraid to head the ball. This is because it hurts, I remember as a child I was the same. Always ducking out of the way from a header and too afraid to fully commit.

Is There Enough Proof That Heading Causes Long Term Effects?

The short answer is, not really…

This is one of the bigger issues that is surrounding the ban of heading in football, is there enough proof to back this up. However, the Football Association (FA) have commissioned research into the long-term effects heading has on the players. These studies will help us better understand whether the heading is truly bad for children and professional players.

There are a lot of players around the world that do not want heading to be banned in training. Simply because of the lack of research that has been done in the past.

Why Do We Believe Heading Is Bad For Children?

The main reason is that the brain and skull have not developed properly in children and could potentially cause long-term effects without us knowing. As a parent, you don’t want your child to suffer any issues linking to the brain. Admittedly, this could be down to the child doing something else rather than football. However, football could definitely be a contributing factor.

Another reason is that concussion is considered likely in most contact sports like football. This is because you will always be competing to get the ball first which sometimes results in the banging of heads. Going back to Ryan Mason before, this is exactly what happened and caused him to end his career. Essentially, you do not want this to happen to your child as I know I definitely wouldn’t.

So Is This Ban Already In Place?

The ban is now in place for children under the age of 12 whilst more research is being done for the older players. However, this is an important step towards a greater future for your child. One that helps to minimise the impact of heading a ball on a consistent basis and hopefully benefit your child’s cognitive development.

Lastly, no parent wants to see their children get a concussion at such a young age. Especially with the misconception that a concussion is when someone is knocked unconscious when in reality this is not the case.

This ban was first initiated by the US Soccer Federation due to a legal battle with parents and clubs. Therefore, some believe that they were the pioneers in getting this introduced globally. However, not all countries have adapted to this ruling and some continue to allow children to head the ball from a young age.

Why Was This Not Introduced Sooner?

This is a question that no one will really have the answer for and the main reason for this is because the research has never been done on it. As to why the research has never taken place is a confusing one. Especially as it has been carried out in other contact sports and although some sports contain more contact than others. There is still the element of risk regardless of the likelihood of getting a concussion compared to other sports.

However, it could be due to the number of retired professionals that have unfortunately passed away to dementia and other serious brain injuries that caused an investigation as to why this was happening. Was it convenient or due to an occupational hazard?

Football for all ages has long been behind in the research sector, so much so that the Headway charity which supports people with brain injuries. Is asking for the Premier League to step up and fund some money towards the research projects linking to long-term issues with heading the ball.

Where Do We Go From Here?

If they have identified heading as an area for concern in the younger generation then why doesn’t the same rule apply for those over the age of 12. Surely, if this is a concern for the younger ages then it could still be a potential harm to adults.

In fact, a world-leading expert in brain injuries, Dr Bennet Omalu, believes there should be restrictions in the professional game and heading should be banned for under 18s. So does that tell us that he believes this is a serious area for concern, I mean he has extensive research on brain injuries.

However, until more information and research is carried out. We will not know the true harm of what heading does from an early age but hopefully, this is something we can find out in the very near future. 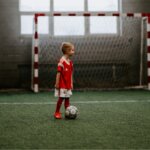 A Guide To Football Ball Sizes 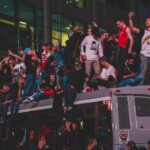 What Are The Protests In Football About?